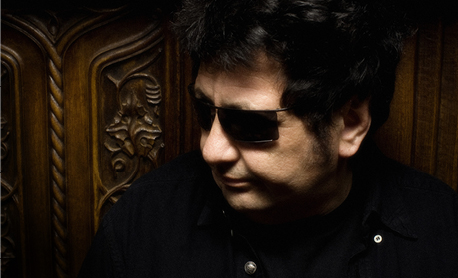 When a Richard Clapton song really gets you right between the eyes, there’s no mistaking it. You know EXACTLY what it feels like to be driving down that road, looking that girl, seeing those city lights, experiencing that particular joy or pain, or thinking that thought. So on his new album Diamond Mine, his first after a self-imposed `four year winter’ (on the recording front, at least), it’s no surprise that once again he’s dug deep and brought up a host of gems: deliciously, inexplicably familiar and foreign all at once.

Having written songs that are firmly embedded in the Australian consciousness and never fail to send a generation off into a reverie of past summers and lost loves, Richard Clapton could easily rest on his laurels or churn out carbon copies of his previous albums. But the opposite is true. Now, more than ever, he takes his responsibility as a modern-day troubadour seriously; exploring new technologies and laying bare new emotions as he chronicles his life, and our lives, in the new millennium.

“Instead of just continuing to release albums for the sake of it, year after year, and have this constant flow of albums, I wanted to take my time,” he says. And take his time he did. Richard wrote the songs for Diamond Mine, his eighteenth album, over a period of four years. Mixed by Rick Will (No Doubt, Incubus, Ben Harper, Joan Osbourne, Cold Chisel, Diesel, Jimmy Barnes etc), it was recorded in his home studio with a who’s who of Australian musicians, including esteemed players such as Terepai Richmond (The Whitlams), Stuart Hunter (Silverchair), Sam Dixon (DIG), Mark Lizotte (Diesel) Ian Moss (Cold Chisel), Dave Leslie (Baby Animals) and Michael Szumowski, with guest vocals from Jason Singh, Tim Wild (Taxiride) and strings by Nigel Westlake (Babe). Richard also created layer upon layer of his own tracks, loops and samples on his computer.

“As far as recording at home goes, I can’t say there are really any negatives to it. It’s really the best work environment I’ve ever had – so conducive to creativity,” enthuses Richard.

“The last three or four years have been one of the best times of my life. It’s great to be able to work on a song when the mood strikes you. And a songwriter, like any creative person, has a vision. Holding your focus to that when you have people around you all trying to convince you to do it their way can be very difficult. With this album I’ve just been able to sit here with the technology. I just start putting ideas down into the computer and I just build. It’s really the most wonderful way to write songs.” Several tracks on the album, most notably `High As The Heavens’, Zweite Neon’ and `What Does It Take To Get Lucky’, make extensive use of computer samples, and Richard likens the process to `trying to paint a masterpiece, no matter how long it takes’.

“Take `High as the Heavens’; without a computer, a song like that would be almost impossible. The computer enables me to manifest my vision, in terms of the complexity of the music. It’s sort of like being a sculptor – you just keep moulding it, seeing how it takes shape”.

For those who only think of Richard Clapton as an Ozrock guitar guru, the foray into computer-driven composition may seem a little off kilter – but as he explains, it’s yet another chapter in a story that’s covered many musical twists and turns. Richard describes how he did the `typical young Aussie going to London thing’ as a young man, getting into the music of Bob Dylan before forming a band with two Americans and a Canadian that was influenced by US West Coast country-flavoured rockers like Neil Young and Buffalo Springfield. After he was `kicked out of the UK and effectively in exile in Berlin’, he befriended a group of radicals who were fans of “what they called `Kraut rock’, like Tangerine Dream” and in order to make friends as well as survive financially, Richard started playing German experimental music, so the end result “came out something like Pink Floyd. Some of it was pretty standard, some of it was really weird”. Returning to Australia in 1972, his singer/songwriter style led to him being pigeonholed as a folk artist, until Girls On The Avenue hit the charts in 1975 and made him into something of a pop star. From there, his gravitation towards rock continued, notably with the album Goodbye Tiger released in 1977 – an Australian classic, despite the fact that much of it had been written in a freezing Danish winter years before.

Richard describes how his work with INXS in the 1980’s (including two years of pre-production for Underneath The Colours)`opened a pandora’s box’ as he discovered/ rediscovered electronics and synthesisers, and spent time listening to the likes of Brian Eno and what he calls `music we liked because it was weird just for the sake of it’. Stepping back into rock territory for his own very successful album Great Escape, which featured the brilliant hit single `The Best Years of Our Lives’, Richard returned again to the world of sequencers and Euro beats for his 1984 album Solidarity. “I suppose as a musician I’m a bit schizo,” says Clapton. Sure enough, before long he was back into singer/ songwriter/ rock mode, working with Cold Chisel and INXS, especially his good friend (INXS drummer) Jon Farris, on the album Glory Road. Since the early 1990’s, Richard has continued to explore various styles, releasing a live album, a best of, and two more studio albums (Distant Thunder and Angeltown) with the emphasis always on trying to best musically express the ideas that just keep flowing.

“Through Jon Farris, I started to get into urban ghetto music, funk and stuff like that,” says Richard, “and I like anything from The Blue Nile and The The through to Bob Dylan and John Mayer. I prefer to listen to music that’s adventurous – people who are trying to push the envelope. I don’t like a lot of what I hear around at the moment that seems to be about mimicry, rather than originality.” As disposable pop seems to be disappearing up its own tight leather pants, and careers pass by in the blink of an eye, it’s good to know that all is not lost. On Diamond Mine, Richard Clapton seems to have distilled his essence to its very best, creating more Australian “classics” in the vein of his hits like `Girls On The Avenue’, ‘Capricorn Dancer’, ‘Deep Water’, `Best Years Of Our Lives’ and `Glory Road’ – fresh and yet somehow, paradoxically, instantly familiar, with characteristic lyrical and musical appeal.

This is an album that shows off Richard Clapton’s broad perspective, from the simple longing of `Obsession’; the happy-go-lucky nostalgia of `Some Sunny Day’; the atmospheric `Head Full of Rain’ and `Zweite Neon’; the philosophical `Simple Things’ and `Bomb The Bomb’; the stand-up-and-shout anger of `What Does It Take To Get Lucky’; to the simultaneous struggle and security of long-term love expressed perfectly in the exquisite title track, `Diamond Mine’.

But, most importantly, we don’t just notice the ability to jump from one musical style to another. It’s Richard Clapton’s ability to seemingly capture our own thoughts and moods which once again has us enthralled. Diamond Mine gives us another chance to immerse ourselves, to drink deeply of the talent of this iconic songwriter/singer/performer, who has spent over three decades continuing to deliver music that speaks to our souls…as only Richard Clapton can.