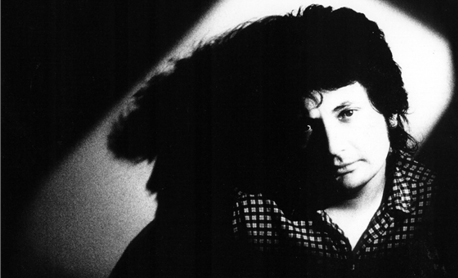 I used to love visiting my daughter when she was living in Tokyo. I’d go to Tower Records, where on the side of the building, in huge letters, it proclaims: “No Music, No Life”.

That’s how I feel.

And the title of this album says it all: Music Is Love.

There was no masterplan when we set out to make this record. I’d never done a covers album. I’ve always written my own songs. But then I realised that doing this album was a way of connecting with my musical past, or, more accurately, my musical beginnings. These songs are where I came from.

The irony is that when the Summer of Love was happening, I wasn’t in California, I was in London and Berlin. But I owned only two cassettes – Neil Young’s After The Gold Rush and David Crosby’s If I Could Only Remember My Name. Those songs are in my DNA.

Initially, this was a deeply personal album. But in a time of Trump and COVID-19, I looked at these songs and realised that the world needed them – right now.

We made this album in isolation. Thank you so much to the band, Danny, Michael, Mick and Clayton for their stellar performances and to our engineer, David “Chippa” Nicholas; and special thanks to Jak, Mahalia, E.J. and Darren and Ray.

A big thank you to Terry Blamey and not forgetting you Keith for all your help. What a long, strange and fun trip it’s been!

To all my friends at Mushroom & Premier, Michael Gudinski, Frank Stivala, Warren Costello and Dean McLachlan.

And personal thanks to Saskia, Montana, Meegan and Grace and to all my fans who have supported me for so long – welcome to the party that never ends!

I look back at that whole period of my youth and those years 1966 to 1970 and I think, “Wow, talk about being born precisely at the right time.”

As I wrote in my book, The Best Years of Our Lives:

I was one lucky hippie.

With over ten years since the end of the war, it was only with the arrival of rock ‘n’ roll, that the frustrated youth of the world were finally able to turn their black and white existence to colour, but as the ’50s drew to a close it heralded a new decade with the message of “peace and love”.  The “hippie” movement started in San Francisco in the 1960’s and quickly spread its idea of love and understanding. Bands like The Youngbloods, The Byrds, Buffalo Springfield and of course Crosby, Stills, Nash & Young gave us songs advocating love, understanding and togetherness; promoting peace and condemning war.

Now half a century later, as we again find ourselves in uncertain times, these songs deserve to be resurrected lest they and the message they bear is lost for all time.

Affectionately referred to as Australia’s Favourite Hippie, Richard has assembled a set of his favourite songs from The Summer of Love. More accurately though, this collection, his first covers album, is an anthology of the best hippie-inspired songs, all written in America in the five-year period 1966-1970. With a few exceptions, these songs of peace, love and harmony were all originally recorded in California and New York, and by the best exponents of the zeitgeist.

‘Try to love one another, right now!’

(Let’s) Get Together has been labelled “the hippie national anthem” for its message of love and togetherness.  It was written by Chet Powers (a.k.a. Dino Valenti) before he became lead singer of Quicksilver Messenger Service and recorded by many.

I have a clear memory of my father returning to Australia after a business trip to California in 1966, bringing me an LP (my first) entitled Jefferson Airplane Takes Off (their first!). The San Francisco record shop proprietor had demanded he buy the album for his teenage son! I loved it!

The pioneer contemporary music magazine, Crawdaddy (according to Rolling Stone, “the first serious publication devoted to rock & roll”) declared it “the most important album of American Rock” in that year. My favourite track was Let’s Get Together (the Youngbloods later retitled it as just Get Together).

Neil Young, David Crosby and Stephen Stills were especially important to Richard growing up in Australia.  Their influence is apparent in the inclusion of several of their songs whether they be solo, in The Byrds, Buffalo Springfield or Crosby, Stills, Nash & Young tracks.

‘we’ve got to get ourselves back to the garden’

Over half a century has passed since the three days of peace and music attended by half a million hippies in upstate New York, famously remembered as ‘Woodstock’, but the music lives on.  Michael Long, the driving force behind the festival called it a “celebration and confirmation of our humanity . . when joy became big news”.

Crosby, Stills, Nash & Young, The Band, John Sebastian, Jefferson Airplane and The Grateful Dead were all there in August 1969, amongst many other famous ‘60’s icons.

Get Together, sung by Richie Havens and Bob Dylan’s I Shall Be Released sung by Joe Cocker were both presented that historic weekend.

In 1969 Joni Mitchell, who was Graham Nash’s girlfriend at the time, wrote the song Woodstock immediately after the festival. It was released first as the B-side to her hit Big Yellow Taxi. David Crosby later stated that, despite her not being able to attend the event,  Joni’s writing portrayed perfectly the significance and the mood of Woodstock.

‘eight miles high and when you touch down

The Byrds’ Eight Miles High, ostensibly refers to a flight to London in 1965. It was banned on US radio in 1966 because of the perceived reference to drugs, which the band denied at the time. However in 1998 David Crosby was quoted as saying: “Of course it was a drug song! We were stoned when we wrote it.” It charted at #14 on 14 March 1966, becoming their third biggest hit, after Dylan’s Mr Tambourine Man and Turn, Turn, Turn.

everybody look what’s going down’

On November, 12th, 1966, over 1,000 young people gathered together on Sunset Strip in L.A. to protest police attempts to close music venues and impose a curfew.  A riot broke out and when the police cracked down the result was hippies being brutally beaten in the streets.

Legend has it that Stephen Stills, who was passing by at the time, witnessed the carnage and was so disturbed by the scene that he wrote this number that begins with: ‘There’s something happening here . .

Stephen wasn’t sure how the record company would take the song with its anti-establishment theme, so when he played it to ATCO, he presented it with the words “for what it’s worth”.

For What It’s Worth (Stop, Hey What’s That Sound) was released by Christmas and went on to become Buffalo Springfield’s biggest hit at #7!

‘cool cat, looking for a kitty’

Twelve months before the Summer of Love in San Francisco, New York experienced an unprecedented heatwave. It was hot and there were anti-Vietnam war riots; relationships were strained. Cool heads were called for. John Sebastian, with his 15 year-old brother and Steve Boone, bass-player from his band The Lovin’ Spoonful, wrote the classic, #1 hit called, Summer In The City. The band were destined for big things but unfortunately only a year later after moving to California they parted ways, primarily due to a marijuana drug bust in San Francisco. The track lives on as a quintessential song of the hippie era.

Now half a century later, as we again find ourselves in uncertain times these songs deserve to be resurrected lest they and the message they bear is lost for all time.

Who better than the perennial hippie, Richard Clapton, to bring us back those songs as only he can. Listen . . .